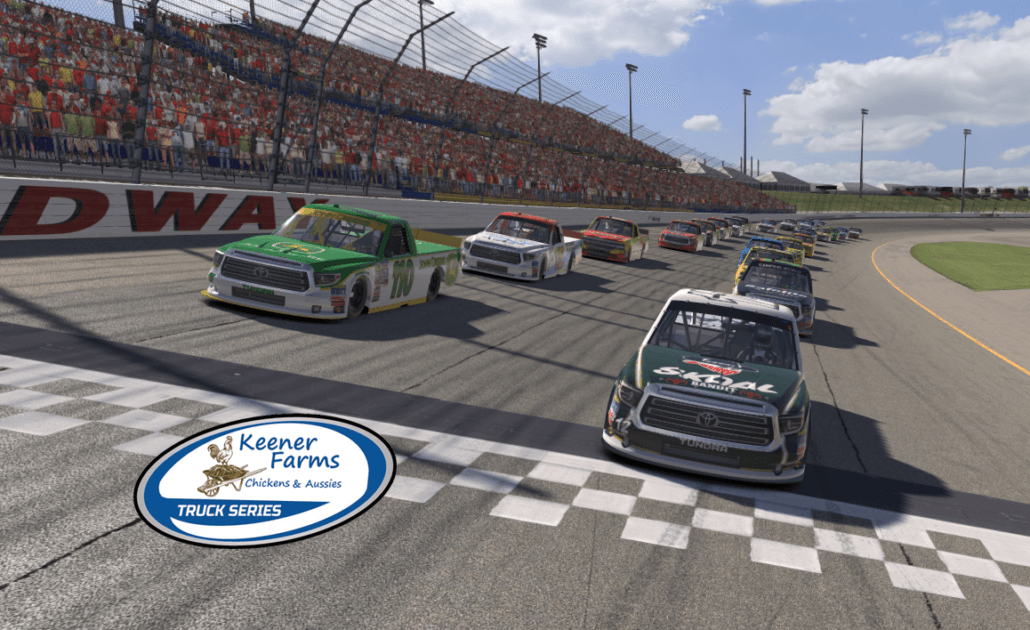 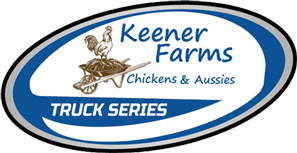 If you are looking for a league that features close door to door racing with a lot of give and take driving with drivers that always show respect to their fellow competitors, applying great race-craft, then the Old Bastards Racing League is the place you are looking for.

Another Great Day For Racing

On a partly cloudy day with a calm breeze coming from the north at 2 miles per hour. The air was warm at 78 degree giving the track a temperature of 106 degrees for the trucks to run on this afternoon at Iowa Speedway. A 0.88 mi oval track 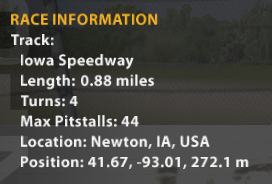 With 34 drivers awaiting the green flag. Qualifying turned out some interesting results as #12 Kevin Rupert posted the fastest qualifying lap of 23.783 to gain the pole. Second was #75 Don Phelps with a time of 23.918. Third was Zack Calloway with a time of 23.943; fourth came #14 Eddie Jones at 23.952. Finally, rounding out the top five was #15 Christopher Monroe with the qualifying time of 23.981. Only 0.198 separated the top five for the start of this race.

The pace lap is tight and drivers are anticipating the green flag. #12 Kevin Rupert smashes the throttle and jumps out to a car length across the start finish line. The entire field is 2×2 going into the first turn. On the back straight position 3 through 6 line up on the outside line leaving #110 Zack Calloway alone on the inside line. The rest of the field still 2×2 going into turn 3 as we look to complete lap one of what looks like is going to be a great race.

As the field is getting set on lap 3 going into turn 2, #91 Kenneth Schulz comes down and contacts the #67 Steve “Mule” Thomson and turns himself sideways coming off turn 2. #11 Thomas Ogle and #87 Brian “Bull”Glass squeak by while #109 Bryce Whitson Jr. Is not as fortunate and slams into #91 Kenneth Schulz. In the back the #3 Peter KopKo checks up to not hit the #4 Mike Schrader and slides it sideways collecting #88 Gary Corbett and the #42 Ed Adams as they all slide down making contact with the inside wall. As the wreck winds down, it still claims other victims as the #91 Kenneth Schulz spins down the track and collects #4 Mike Schrader on the tail end of this accident. 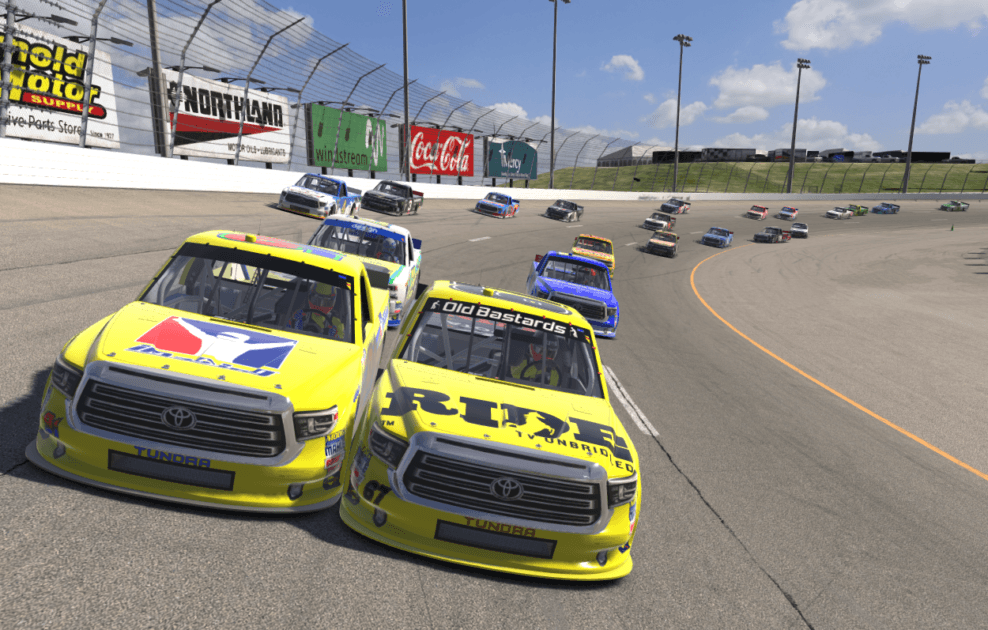 #11 Thomas Ogle and #87 Brian Glass Squeak by while #109 Bryce Whitson Jr. Is not as fortunate and slams into #91 Kenneth Schulz.

In the back the #3 Peter KopKo checks up to not hit the #4 Mike Schrader and slides it sideways collecting #88 Gary Corbett and the #42 Ed Adams as they all slide down making contact with the inside wall. As the wreck winds down, it still claims other victims as the #91 Kenneth Schulz spins down the track and collects #4 Mike Schrader on the tail end of this accident.

As half the field goes in for repairs, tires, and gas the order of the restart on lap 7 is now #12 Kevin Rupert lined up on the inside, #75 Don Phelps, #110 Zack Calloway, #14 Eddie Jones, and rounding out the top 5 on the restart is #15 Christopher Monroe. 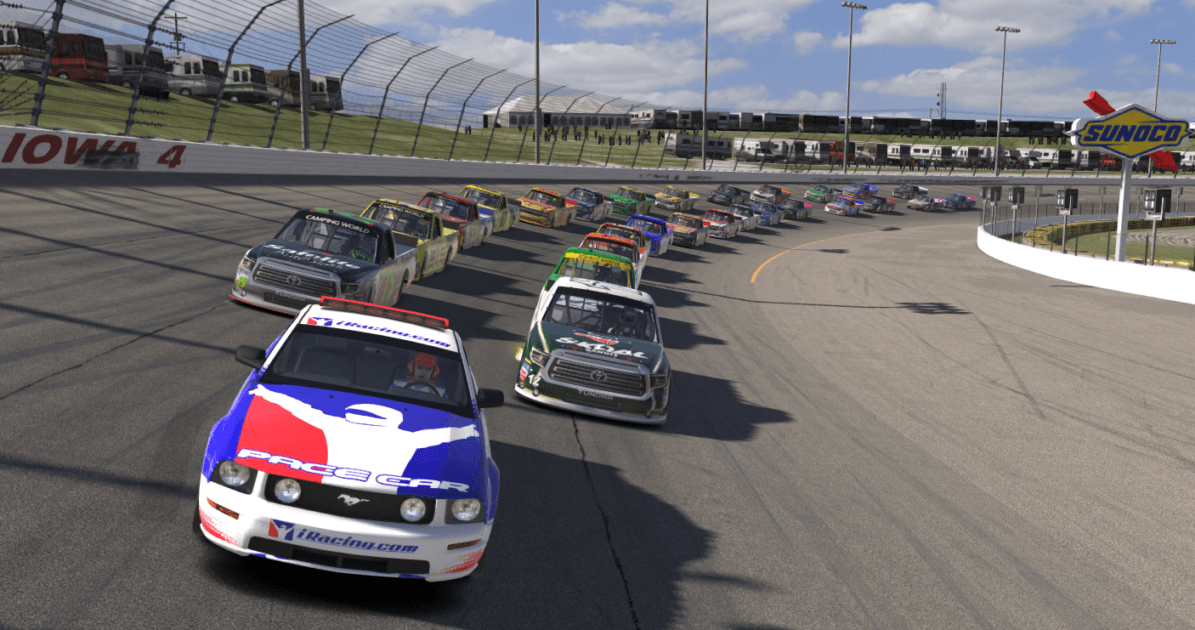 Again on the restart #12 Kevin Rupert gets a great start and jumps to the outside line going into turn 1 as the #110 Zack Calloway follows looking to get in behind the #12 Kevin Rupert. Back in the pack #117 Raymond Caton at position 18 seems to be having mechanical issues as entering turn one he does not shift out of third gear and #16 Tony “Cyber” Romack contacts the rear bumper of the #117 Raymond Caton.

Coming out of turn #117 Raymond Caton still having gear issues on the back straight moves down and contacts the #18 Dan Berghoff and they both head into the outside wall at 129 mph. 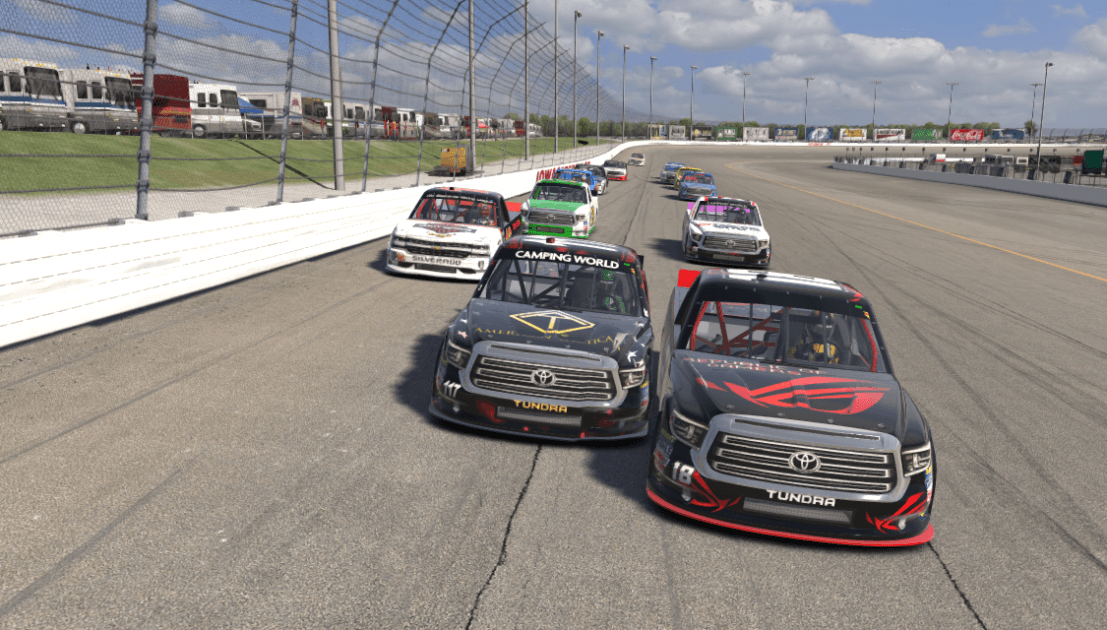 The restart on lap 13 looks tight, as the drivers seem to be ready to knock down some green flag laps. Bringing us to the line is #12 Kevin Rupert, #110 Zack Calloway, #75 Don Phelps, #15 Christopher Monroe, and #14 Eddie Jones. GREEN, GREEN, GREEN. Nice even start as both the #12 Kevin Rupert and the #110 Zack Calloway get a great start side by side heading into turn 1, battling out of turn 2. 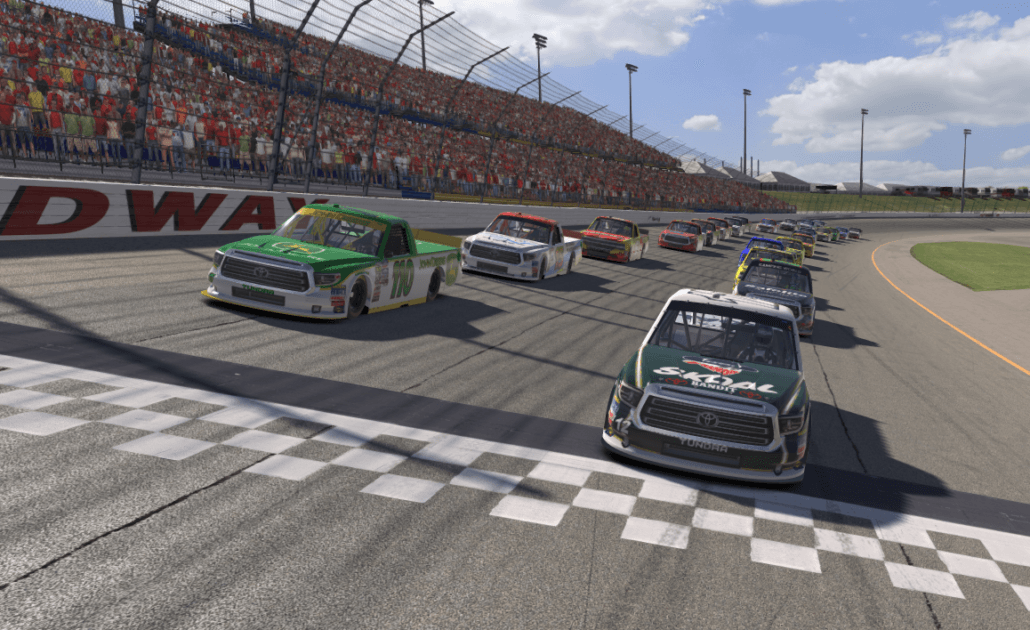 Turning him into the #01 of Rob Connors they both turn sideways. #87 Brian Glass wrestles that beast and saves a truck that did not want to be saved. #01 Rob Connors has a less Luck and slides and comes to rest in the middle of the track. Everyone else seems to make it through except for the #88 Gary Corbett as he becomes collateral damage being hit by the #58 Michael Everhart in the late part of this accident.

Some great racing throughout the field as it looks like the drivers have calmed down and are ready to race. Lap 24 a great battle is forming for position 9 with #67 Steve “Mule” Thomson, #109 Bryce Whitson Jr., and #46 Ken Huff going into turn 2 looking 3 wide.

Looks like the outside line is the preferred line as the #46 Ken Huff and #154 Adam Disselkamp get freight trained by the field and are left hanging out to dry before getting into position.

#44 Niels “Koni” Clyde powers through and comes out  ahead on the back straight. #128 Brad L. Bothwell takes the invite and continues to hold #4 Mike Schrader low and goes into turn 3 and 4 side by side with #4 Mike Schrader . Down the front straight #4 Mike Schrader gets back in line and enters turn 1 losing 2 positions on that attempt

Lap 48 #77 Vernon Margheim gets loose coming off turn 2 and does a wiggle, left, right, left, right down the back straight trying to save it finally coming to rest and moving on from the middle if the back straight heading in the right direction. #87 Brian “Bull” Glass does a great job with car control missing the #77 by inches. This brings us to our 3rd caution and some welcomed pits stops for gas and much needed tires. 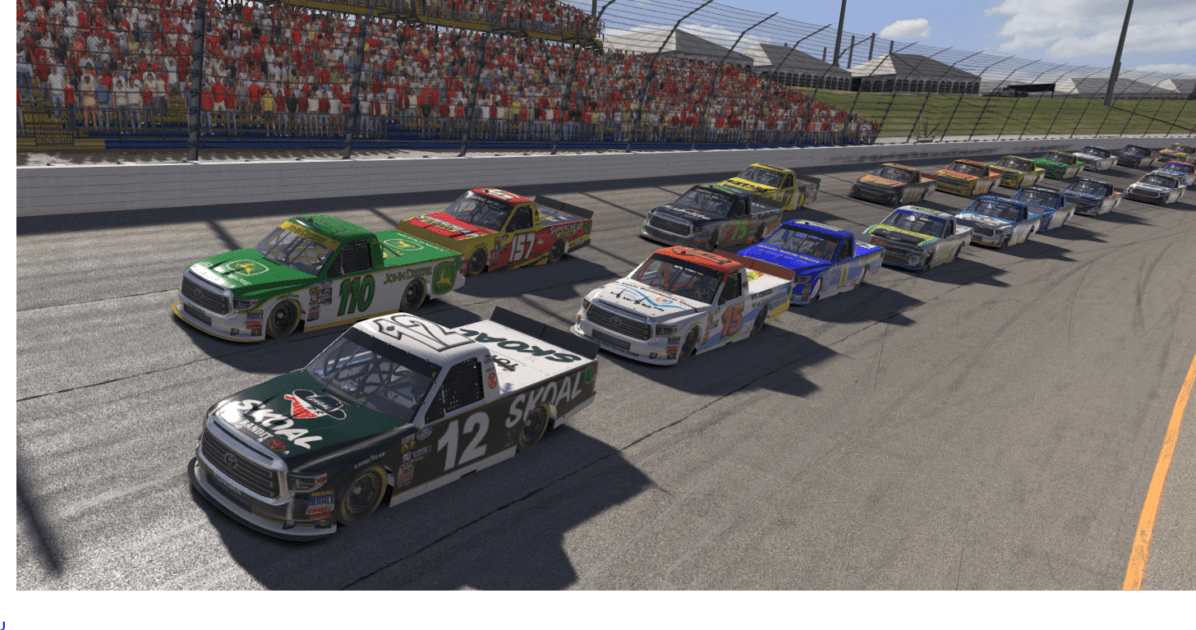 The field seems more timid as everyone seems to be giving room to one another and getting into single file all the way throughout the field.

Lap 59 coming off turn 2 #77 Vernon Margheim in position 22 sets up a pass on #01 Rob Connors down the back straight.

Going low they enter turn 3 side by side coming out of turn 4 having a drag race down the front stretch. Going into turn 1 #01 Rob Connors comes down on #77 Vernon Margheim entering the corner for a little door banging.

Laps 80 through 90 bring us to some green flag pit stops which really separate the field putting #67 Steve “Mule” Thomson in the lead at lap 93 followed by #154 Adam Disselkamp in 2nd, and #46 Ken Huff in 3rd.

Lap 106 #67 Steve “Mule” Thomson position 1 and #154 Adam Disselkamp come in for fuel giving the lead back to #12 Kevin Rupert as he seems to be the truck to beat today running up front for just about the entire race.

In the middle of the pack the battle for 12th now has 10th,11,12,13, and 14th all within sticking distance of each other. #67 Steve “Mule” Thomson in position 10 with fresh tires pulls away and leaves the boys to fight for 11th.

Position 11 is decided early as #154 Adam Disselkamp pulls away out of turn 2 and now we have a 3-way battle for 12th.

Down the back straight #56 Mike Watts low and in front of #87 Brian Glass high with #31 Tommy Cannon low on the bumper of #56 Mike Watts. Only a foot or 2 between these guys as the steam towards turn 3.

They go 3-wide into the corner with #87 Brian Glass high, #56 Mike Watts mid track and #31 Tommy Cannon low. As they enter the center of the corner #36 slides up into #87 Brian Glass squeezing him to the outside wall slowing him.

Ahead of the mayhem #12 Kevin Rupert takes the checkered flag with #110 Zack Calloway in position 2 followed by #109 Bryce Whitson Jr. in 3rd.

Congratulations to the top 3 #12 Kevin Rupert, #110 Zack Calloway, and #109 Bryce Whitson Jr as well to the entire field for an exciting race and a very exciting finish.

Next week Oct 10, 2018 Race 4 – the OBRL Keener Farms Truck Series heads to Talladega SuperSpeedway for another exciting truck series event.  Where we expect long green flag runs and 2×2 action throughout the field. The tracks where friends are needed but only last until the last lap. Come join us at 200mph inches apart while holding your breath in anticipation of seeing “The Big One”.

If you liked what you read and are interested in becoming a member of a well-managed professional league, where the Rules are clear and strictly enforced. Every race begins with a Pre-Race drivers meeting, Post-Race congratulations and discussion are the norm. Where drivers help other drivers. Driving school is readily available. Not to mention, some of the best virtual online racing to be found anywhere. Go to OBRL.racing to fill out an application to join this great league.